President Trump requests mail-in ballot even as he assails voting-by-mail. New Jersey will send ballots to all 6.3 million voters in the state, over President Trump’s objections. Kamala Harris’s presence on the Democratic ticket generated a quick $50 million. 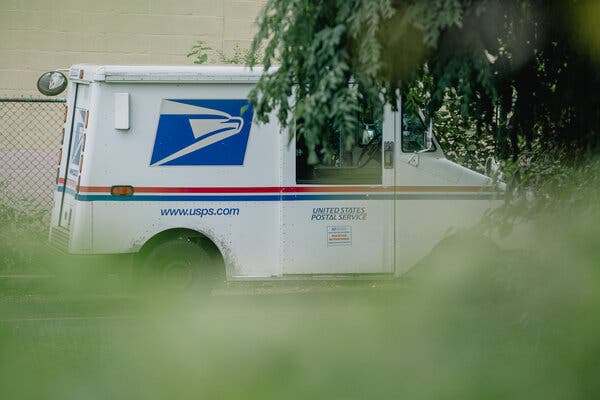 The general counsel for the Postal Service warned that “certain deadlines for requesting and casting mail-in ballots are incongruous with the Postal Service’s delivery standards.”Credit...Michelle Gustafson for The New York Times

The Postal Service has warned states that it may not be able to meet their deadlines for delivering last-minute mail-in ballots, another development in a growing controversy over the new postmaster general’s handling of vote-by-mail operations as President Trump continues to rail against the practice.

In letters sent in July to states across the country — including electoral battlegrounds like Pennsylvania, Florida and Michigan — Thomas J. Marshall, general counsel for the Postal Service, warned that “certain deadlines for requesting and casting mail-in ballots are incongruous with the Postal Service’s delivery standards.”

As many states turn to vote-by-mail operations to carry out elections safely amid the coronavirus pandemic, Mr. Marshall urged them to require residents request ballots at least 15 days before an election — rather than just the four days allowed under some state laws.

“This mismatch creates a risk that ballots requested near the deadline under state law will not be returned by mail in time to be counted,” Mr. Marshall wrote.

Many states have long allowed voters to request a mail ballot close to the election — only one, Rhode Island, meets the standard now being suggested by the Postal Service — but the Postal Service suggested that the large volume of voting by mail at a time of widespread delivery delays meant that states would be better off building more time into their systems.

In response to the warning letters, some states, including Pennsylvania and Michigan, have called for extensions on counting late-arriving ballots in the November election.

“We have asked the legislature to change Michigan law to allow ballots postmarked by Election Day that arrive within a certain window to be counted,” said Tracy Wimmer, a spokeswoman for Michigan Secretary of State Jocelyn Benson.

The increased demand for vote-by-mail operations comes as the Postal Service itself is undergoing cuts to its operations. The new postmaster general, Louis DeJoy, a Republican megadonor and ally of Mr. Trump, has argued that he is modernizing the money-losing agency to make it more efficient. Among his moves have been cuts to overtime for postal workers, restrictions on transportation and the reduction of the quantity and use of processing equipment at mail processing plants.

In June, shortly after Mr. DeJoy was selected to lead the agency, union officials received a notice that Postal Service management was removing 671 machines used to sort mail quickly due to a “reduction to letter and flat mail volume.”

Mail operations in several battleground states were hit hard by the cuts. On the list for removal were 24 delivery bar code sorters in Ohio, 11 in Detroit, 11 in Florida, nine in Wisconsin, eight in Philadelphia and five in Arizona.

Trump, who has railed against voting by mail, requests his mail-in ... 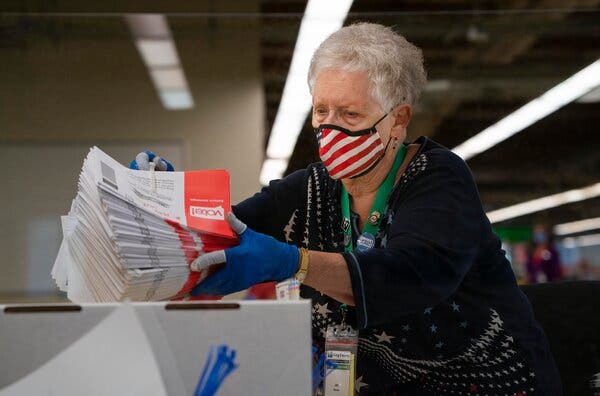 President Trump has said that the Postal Service will not be able to handle widespread voting by mail in November without billions of dollars that he has opposed allocating.Credit...Ruth Fremson/The New York Times

The country’s most outspoken critic of voting by mail has requested his vote-by-mail ballot.

The Palm Beach County elections department in Florida has prepared mail ballots for this Tuesday’s primary election for President Trump and Melania Trump, the first lady, according to local registration records.

The Trumps changed their primary residence last year from Manhattan, which has been less than welcoming to the president since his election, to Mr. Trump’s members-only Mar-a-Lago resort in Palm Beach, which had long been their winter home.

How and where a president votes is typically a footnoted formality. But Mr. Trump has broadly questioned the legitimacy of voting by mail, without evidence of significant voter fraud, and made statements suggesting that he views expansion of mail voting as a threat to the Republican Party.

He has sought to deny the option to millions of Americans in states like Nevada, through litigation, while attempting to block additional funding for the Postal Service that he says would be needed to handle a crush of mail-in ballots prompted by the pandemic.

Those moves have raised concerns among Democrats and voting rights groups that he is seeking to undermine the mail-balloting system and lay the groundwork for casting doubt on the November election should he lose.

Gov. Steve Sisolak of Nevada, a Democrat who recently signed a universal mail-in ballot law, has said Mr. Trump’s fraud claims are unfounded. “We have never had any problems,” he told CNN last week.

Mr. Trump has supported mail-in voting in some states where he says it is secure, including Florida, which he suggested last week could handle mail voting successfully because it had “a great Republican governor” in Ron DeSantis, a Trump ally.

Mr. Trump suggested Thursday that he was using the funding as a negotiating chip with congressional Democrats on a larger stimulus package. “If we don’t make a deal, that means they don’t get the money,” he said. “That means they can’t have universal mail-in voting, they just can’t have it.”

The Trumps’ ballot request was first reported by The Palm Beach Post. They have until 7 p.m. on Tuesday to return their ballots for the upcoming elections, which include primaries for county commission, state legislature and federal offices.

TRUMP RESISTS POST OFFICE FUNDING
President Trump stirred new questions about whether he would seek to hold up money to impede mail-in voting this fall.
HTTPS://WWW.NYTIMES.COM/LIVE/2020/08/14/US/ELECTION-BIDEN-VS-TRUMP?... 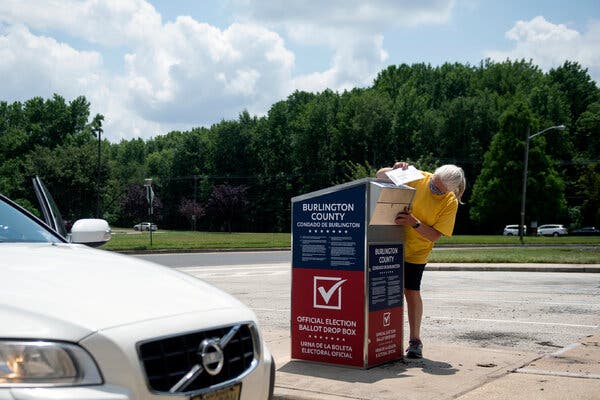 With President Trump and congressional Democrats fighting over funding the Postal Service, many states — and politicians up for re-election this fall — are grappling with the uncertainty around the expansion of mail-in balloting prompted by the pandemic.

Some key developments in the last 24 hours:

A federal judge in Pittsburgh ordered the Trump campaign to produce proof of voter fraud claims. District Judge J. Nicholas Ranjan on Thursday ordered Republicans who have challenged Pennsylvania’s expansion of mail-in voting to turn over evidence by the end of today that the system has led to ballot irregularities or face the possible dismissal of their suit.

The state Democratic Party and the Sierra Club, which intervened in the case, had requested that the plaintiffs — the Trump campaign, the Republican National Committee and Pennsylvania’s Republican Party — turn over specific evidence of fraud, after the Republicans claimed the changes provided “fraudsters an easy opportunity to engage in ballot harvesting” and other manipulations.

“Plaintiffs shall produce such evidence in their possession, and if they have none, state as much,” wrote Mr. Ranjan, a Trump appointee.

Thomas J. Marshall, the counsel, wrote to Pennsylvania’s secretary of state, Kathy Boockvar, whose department oversees elections, that some mail ballots might not be delivered on time because the state’s pre-existing deadlines for sending out ballots were too tight for its “delivery standards,” The Philadelphia Inquirer reported.

All New Jersey voters will get mail-in ballots. Gov. Philip D. Murphy announced Friday that every registered voter in the state would be mailed a ballot and could choose whether to vote by mail or in person. “We’re going to have a hybrid model in November,” Mr. Murphy told CNN.

New Jersey, which conducted its July primaries almost entirely by mail, would become the ninth state in the country to automatically send voters mail-in ballots if Mr. Murphy takes the actions he outlined.

NEW JERSEY’S PLAN
The state will send ballots to all of its 6.3 million voters, over President Trump’s objections.

“This pandemic threatens the very survival of U.S.P.S.,” the statement said. “Yet, while postal employees are on the front lines providing essential services to the public every day, the current administration refuses to provide the necessary financial relief that would strengthen the agency during this pandemic.”

The House minority leader signaled Republican support for a post office funding deal. Kevin McCarthy, a California Republican and close Trump ally, told CNBC Friday that his members were open to including new cash for mail-in voting in the stalled coronavirus relief package. “The Postal Service will have the funding that it needs,” he said.

President Obama said Mr. Trump was trying to “kneecap” the post office. The former president, speaking on a podcast released Friday, joined the chorus of Democrats accusing his successor of attempted voter suppression.

“What we’ve never seen before is a president say, ‘I’m going to try to actively kneecap the Postal Service to encourage voting, and I will be explicit about the reason I’m doing it,’” Mr. Obama told David Plouffe.

Senator Susan Collins of Maine broke with Trump on Postal Service funding. Ms. Collins, a Republican facing the toughest re-election campaign of her career, said Thursday that she opposed cuts for the post office and believed that her state’s no-questions-asked mail-in voting system was safe and secure.

Ms. Collins said the concerns Mr. Trump has raised about the voting by mail were “no reason not to support assistance” for the Postal Service, according to The Bangor Daily News.

A VOTE-BY-MAIL MAP
A record 76 percent of Americans are eligible to vote by mail in the 2020 election, according to a New York Times analysis.
https://www.nytimes.com/live/2020/08/14/us/election-biden-vs-trump?...